Showing posts from December, 2006
Show all

"End of the World" in Cold River Review 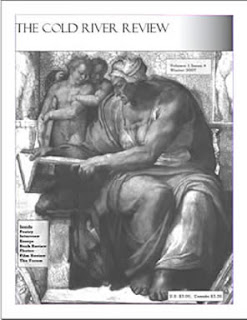 Interview: The Thinker/Writer Richard Heinberg talks of a future with less oil. Read the Interview .

An Essay: "After Tomorrow" by Peter Demenocal.

Fiction: "End of the World" by Sushma Joshi.

Book Review:Suzanne Orlando writes about the book Incidents in the Life of a Salve Girl by Harriet Jacobs.

Film Review:Teresa Podlesney writes about the film Born in Flames, a 1983 movie by Lizzie Borden.
"Most likely we’ll see oil wars for control of the world’s remaining resources, because oil is a strategic material. We have had many oil wars before, even when oil was quite abundant. As it becomes scarcer, it is very likely that we will fight over what is left. Then we will see a collapse of the economy, because we won’t be able to sustain easy economic growth.". -Richard Heinberg from the interview.
Post a Comment
Read more
More posts