Showing posts from 2012
Show all

- December 31, 2012
My play "I Killed My Best Friend's Father" was accepted to the Kali TalkBack Festival in 2012 for dramaturg support. Caroline Jester worked with me to hone down the play, and provided excellent support. It was stage read at the Arcola Theatre with the rest of the other plays at the festival in December 2012 to a packed audience.

"Cheese" in the Tasmanian Certificate of Education's ESL external assessment

- December 24, 2012
My short stories have been used by the educational system in Australia.

In 2012, the Tasmanian Certificate of Education used my short story "Cheese" in their English as a Second Language External Assessment.
Check out the exam here.

- December 15, 2012
Hi Sushma, I hope you're well. I just wanted to let you know that I thought the reading of 'I killed my best friend's father' was brilliant. Like your short stories, it was deceptively simple on the surface but explored some very hard-hitting themes. I really enjoyed meeting Rosamunde and seeing what she did with the play. When I heard about the two ghosts of the fathers - and the rather close to the bone humour - I thought to myself, 'goodness, is this going to actually work??' And, lo and behold, it did. So were you able to watch the whole thing on the live stream in KTM? How did you feel it went?
I thought that the way you wove the migration/ post-conflict theme into the play so seamlessly was really good. You will be interested to know that I brought someone along to see the play with me who had never been to Nepal and had no knowledge of the culture or recent history, and he was able to follow the play and engage with it without any problems, so it looks l…
Post a Comment
Read more

Issue 12 ~ November 2012 Soft Things by Sushma Joshi “We are looking for some komal maal,” Sailesh says. Sailesh, a journalist from the local newspaper, who’s been recruited to take us along and act as our guide in the redlight district. In the words of international journalism, he’s a fixer. And that’s precisely what he’s doing right now—asking for a soft thing with the casual inflection of a man used to asking for soft things. I don’t think he necessarily frequents child prostitutes. But his tone makes it abundantly clear that whatever we are after, he’s willing to procure for us—and if it’s a soft thing, he’ll get us a soft thing.

Sushma Joshi is a writer and filmmaker from Nepal. Her book “The End of the World” was long-listed for the Frank O’Connor Short Story Award. Her short film “The Escape” was accepted to the Berlinale Talent Campus. She has a BA from Brown University.

Mascara Literary Review #12 is out!

My writings in school curricula

My short stories have found their way to school curricula and teaching syllabi worldwide.

INDIA
"The Prediction" is part of the syllabus for MA students at Shivaji University, India.

In 2012, "Cheese" was used in an English speech contest held at St Mary College, in Japan, by Junior High School students.


History of St Mary College St. Mary College, officially Nunoike Gaigo Senmon Gakko, was established in 1987, with the approval of the Aichi Prefectural government. According to Article 1 of the Japanese School Education Law, a Senmon Gakko is identified as a technical college not connected to a university. It is defined further …
Post a Comment
Read more

My play on at Kali TalkBack Theatre 3pm, December 8th 212 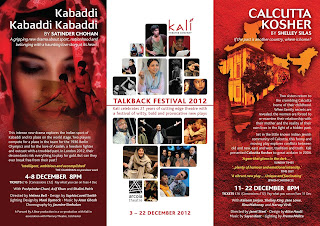 I had an Amparo Tomas dream last night

- November 13, 2012
Amparo was very upset about something. She was going on, in that passionate way, about an issue of great concern. She saw me looking at her and she realized I was clueless. “You have no idea what’s going on, do you?” she said.

I admitted I was clueless.

“They have started to tinker with watches. Now people have to wear watches which show their gender-whether they are male or female, and their height as well!”

I was bemused. “Does it matter?” I asked.

“YES, IT DOES MATTER!” She said, in that inimitable Amparo way. “OF COURSE IT MATTERS. It is screwing with universal standards!”

Those who know Amparo know she yelled a lot, often in frustration, often at those who failed to understand the urgency of the situation. How urgent it was to have the same universal standards of rights, everywhere, everytime!

What was my dream about? If Amparo was yelling at me from across the divide of Death, this was definitely something quite important. The clocks/watches, I think, came out of my mind bec…
Post a Comment
Read more

My story "I did not mean to sell you" is now available in Yomimono, edited by Suzanne Kamata and published from Japan.

Society of Writers, Editors and Translators|SWET

And if you are teaching English in Vietnam, you may want to...

- August 09, 2012
Work with my short story "The End of the World," as the English Action Center in Hanoi has done.
Post a Comment
Read more
More posts